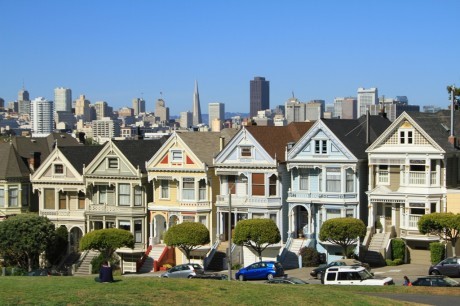 Finding the right home in the right neighborhood can be difficult, especially if you’re hoping to find a progressive and safe space that is diverse and accepting. This leads many in the LGBTQ community to seek out those larger-than-life communities that have traditionally been centered around queer culture and entertainment. These so-called “gayborhoods” have achieved an almost reverential status for many, especially for individuals hoping to find acceptance and a place to belong.

From Chicago’s Boystown neighborhood to New York’s West Village, Denver’s Cheesman Park to Florida’s Wilton Manors, there are (or were) a few illustrious and well-known meccas for LGBTQ folk. But are gayborhoods still thriving social spaces viable for long-term living?

The Origin of the Gayborhood

Generally speaking, gayborhoods are spaces that grew organically out of both necessity and desire. Even just a few decades ago, the status of equal rights in the LGBTQ community was very different from how things are today, even in their still limited state, under constant attack. Being gay – or anything other than heteronormative – wasn’t acceptable, and people found themselves lost and seeking understanding, acceptance and love as they moved through their lives.

In response to the rejection posed by the mainstream, communities consisting of LGBTQ members and businesses that catered to them began to spring up in large cities across the nation. Eventually termed “gayborhoods”, these neighborhoods tended to take root in affordable, less desirable locations that made them affordable despite big city pricing, and offered inhabitants a host of opportunities to shape the space to their needs and wants.

In time, gayborhoods became vibrant communities full of diverse businesses and improved economic growth. Additional businesses designed around the LGBTQ community began to spring up in the area, improving the economic success of the neighborhood and offering its inhabitants even more places in which to exist separately from the less-accepting existence mainstream society afforded. From renovating old buildings to building new ones, gayborhoods truly underwent a transformative process from the run-down enclaves they once were, to the dynamic neighborhoods they became. Unfortunately, this improvement might have spelled the doom of these special spaces.

A decade or two ago, things began changing in even the most established of gayborhoods. The improvements brought about by the dedication of the LGBTQ communities in these spaces caught the attention of wealthy investors interested in now living and developing these now “new nicer areas of the city”. A far cry from the “gay ghettos” that they once were, gayborhoods were exciting, progressive areas with thriving businesses and great real estate – they were, in short, exactly what those investors were seeking. As wealthy and straight people poured into these neighborhoods, however, they began to undergo significant transformations.

Instead of reveling in the existing community, newcomers demanded that the neighborhoods accommodate more traditional schedules and families. Gay businesses, particularly gay bars, gay nightclubs, and even adult theaters, began to close en masse in response to growing pressure. By that point, however, the real estate prices in the area had already skyrocketed well beyond what most people could afford to pay, driving out many of the same people who dedicated their time and money to fixing up the neighborhood in the first place. The communities were no longer affordable to young LGBTQ people seeking to forge their own path in the world after leaving their parents’ home, often not by choice. They became spaces the wealthy and established called home.

Ironically, gayborhoods became too desirable – a bit too economically successful – for everyone else to resist.

The return of the wealthy to the city isn’t the only reason gayborhoods have become scarce, of course. There are a plethora of additional factors. Chief among them is the sweeping reform in social perception and acceptance of gay culture and the LGBTQ community. As mentioned above, gayborhoods formed because the people within them were seeking the acceptance they couldn’t find elsewhere. It makes sense, then, that as acceptance becomes more common, the need for separate communities has begun to become a bit less critical than it was in the ‘70s, ‘80s and ’90s.

As knowledge and increasing integration becomes more mainstream, the gayborhoods of yore have become somewhat of a dying breed. They might not be completely gone, of course, and there are certainly still historically gay neighborhoods in existence. But they are no longer quickly-growing spaces that serve as a sanctuary for the LGBTQ community – they’ve become a bit more diverse and a bit less “gay”, with some long-time inhabitants finding real estate in outside communities even as more traditional families move in.

Are gayborhoods dead? No, not truly – not yet. But they aren’t exactly thriving, either, and it’s probably not the best idea to seek these spaces out when you’re looking for real estate if your sole purpose is to live in an accepting neighborhood. There are now many different spaces where LGBTQ folk can find acceptance and a safe home. Connect with a Top LGBTQ real estate agent at GayRealEstate.com and start a conversation about your buying, selling or relocation needs. GayRealEstate.com has been serving members of our community for over 25 years – there is never a cost or obligation to be represented!

Reasons to Look for an LGBTQ Community Cent[…]